Paulie | The “Strange Fire” of Nadab and Abihu
16244
post-template-default,single,single-post,postid-16244,single-format-standard,ajax_fade,page_not_loaded,,qode-theme-ver-7.4,wpb-js-composer js-comp-ver-4.5.2,vc_responsive

The “Strange Fire” of Nadab and Abihu 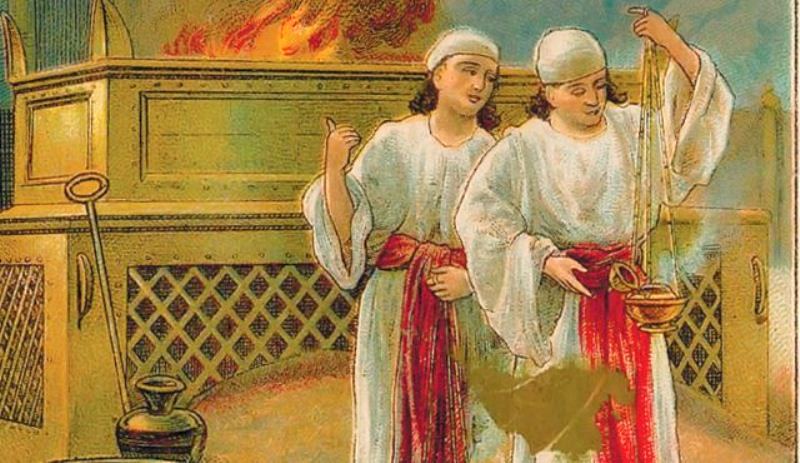 06 Mar The “Strange Fire” of Nadab and Abihu

Posted at 19:30h in A Glance at the Bible by Paulie 4 Comments
0 Likes

These are the names of two sons of Aaron, anointed priests, whom he consecrated to minister before the Lord.

If you recall, dear reader, one of the very first things that the Lord had done after delivering the Israelites from Egypt, was to instruct them on the right ways of worship.

After more than 400 years of servitude, the Israelites had no doubt absorbed some of the religious practices around them, chief among them the strange pagan rites involved in Egyptian idol worship.

No doubt you remember the strange incident involving a certain golden calf?

Shortly after the Lord had miraculously led them across the Red Sea, our friends the Israelites had wasted no time in worshiping this lifeless work of their hands. It is no wonder then, that God had taken immediate steps to re-introduce Himself to His people, and had taken time to instruct them on how to worship Him, and Him alone.

He had detailed exactly how they would build the holy tabernacle, while on their way to the Promised Land; He had shown them the specific rites that would be performed there, the types of vessels that were to to be used – everything – right down to the fabric the priests should wear and the process of their consecration for service.

That’s how specific He had been.

But enter Nadab and Abihu, eldest sons of Aaron the Priest.

Not much is recorded of Nadab and Abihu except this; that while ministering as Priests, these hapless brothers had taken it upon themselves to offer “strange fire” before the Lord.

Infact, some versions of scripture refer to it as “profane fire”.

One second, dear reader, as I Google this term.

“Profane; /prəˈfān/; adjective; relating or devoted to that which is not sacred or biblical; secular rather than religious.”

Poor Nadab and Abibu, it seems, had understood neither the purpose of worship nor their role in it.

And although we are not told exactly how they had profaned the prescribed process of worship, we do know that their punishment was swift and immediate.

They died immediately, right there on the spot.

I write this story, dear reader, because I am fully persuaded of one thing; that the Lord our God is, above all else, worthy of our deepest honor and respect.

Yes, He is our Loving Father, and yes, we are living in the wonderful Age of Grace.

But His position in our lives has not, and will never, change.

He is still Elohim, the Lord God Almighty, creator of heaven and earth.

He is still El-Shaddai, our All-Sufficient God.

He is still Jehovah, the God of our everlasting Covenant.

And He is still Adonai, to whom Abraham reverently referred as “Lord” and “Master”.

So friends, whenever we approach God in worship, let us remember that He is the same yesterday, today and forever, and that He still demands the same reverence and honor that He did at the time of Abraham and of Nadab and Abihu.

Let’s not offer up to Him profane fire in form of worship that does not glorify or minister to Him; “worship” that is merely for our own entertainment or vain glory.

Hear His reply to Aaron’s complaint, concerning the unfortunate demise of his two sons:

BY THOSE WHO COME NEAR ME
I MUST BE REGARDED AS HOLY;

AND BEFORE ALL THE PEOPLE
I MUST BE GLORIFIED.

God, it appears, was dead serious concerning this matter, pun most certainly intended.

And so Aaron, though deeply in mourning, had held his peace.

Let’s always remember this powerful story, dear reader, as we offer up worship to our God Most High..

Then Nadab and Abihu, the sons of Aaron, each took his censer and put fire in it, put incense on it, and offered profane fire before the Lord, which He had not commanded them.

So fire went out from the Lord and devoured them, and they died before the Lord.